Elbow Injuries in the Throwing Athlete

Overhand throwing places extremely high stresses on the elbow. In baseball pitchers and other throwing athletes, these high stresses are repeated many times and can lead to serious overuse injury.

Unlike an acute injury that results from a fall or collision with another player, an overuse injury occurs gradually over time. In many cases, overuse injuries develop when an athletic movement is repeated often during single periods of play, and when these periods of play — games, practices — are so frequent that the body does not have enough time to rest and heal.

Although throwing injuries in the elbow most commonly occur in pitchers, they can be seen in any athlete who participates in repetitive overhand throwing.

Your elbow joint is where three bones in your arm meet: your upper arm bone (humerus) and the two bones in your forearm (radius and ulna). It is a combination hinge and pivot joint. The hinge part of the joint lets the arm bend and straighten; the pivot part lets the lower arm twist and rotate.

At the upper end of the ulna is the olecranon, the bony point of the elbow that can easily be felt beneath the skin. 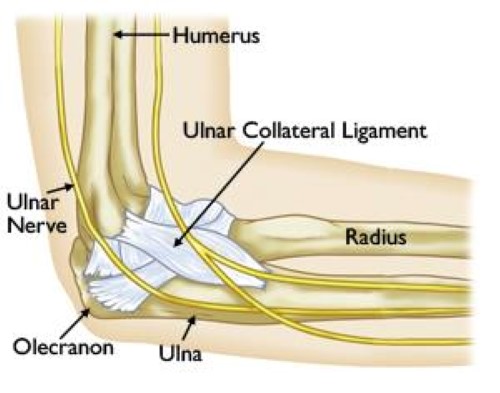 The normal anatomy of the elbow joint shown from the side closest to the body. The bones, major nerves, and ligaments are highlighted.

Several muscles, nerves, and tendons (connective tissues between muscles and bones) cross at the elbow.The flexor/pronator muscles of the forearm and wrist begin at the elbow, and are also important stabilizers of the elbow during throwing.

The ulnar nerve crosses behind the elbow. It controls the muscles of the hand and provides sensation to the small and ring fingers. 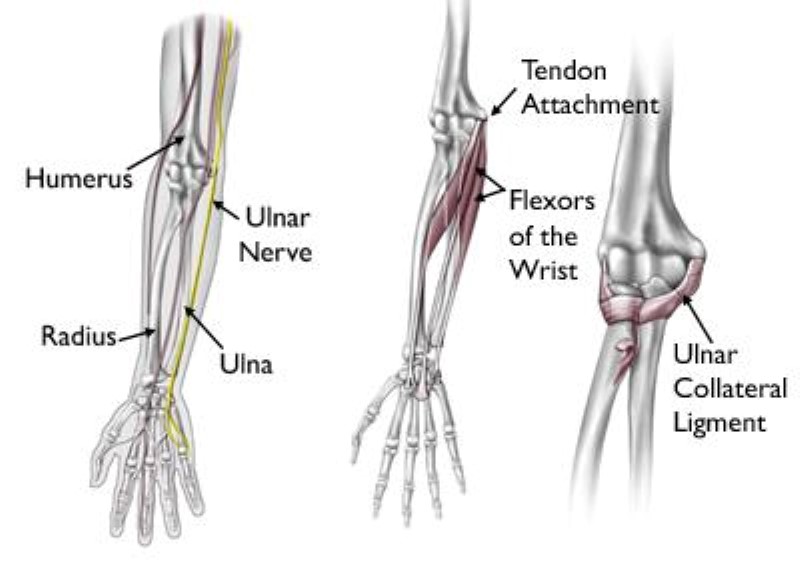 Common Throwing Injuries of the Elbow

When athletes throw repeatedly at high speed, the repetitive stresses can lead to a wide range of overuse injuries. Problems most often occur at the inside of the elbow because considerable force is concentrated over the inner elbow during throwing. 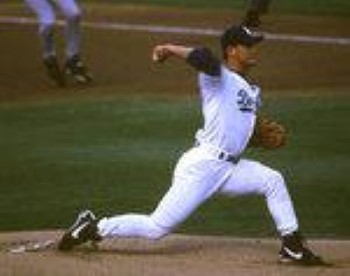 Repetitive throwing can irritate and inflame the flexor/pronator tendons where they attach to the humerus bone on the inner side of the elbow. Athletes will have pain on the inside of the elbow when throwing, and if the tendinitis is severe, pain will also occur during rest.

The medical history portion of your initial visit includes discussion about the athlete’s general medical health, symptoms and when they first began, and the nature and frequency of athletic participation.

During the physical examination, the doctor will check the range of motion, strength, and stability of the elbow. He or she may also evaluate the athlete’s shoulder.

The doctor will assess elbow range of motion, muscle bulk, and appearance, and will compare the injured elbow with the opposite side. In some cases, sensation and individual muscle strength will be assessed.

The doctor will ask the athlete to identify the area of greatest pain, and will frequently use direct pressure over several distinct areas to try to pinpoint the exact location of the pain.

To recreate the stresses placed on the elbow during throwing, the doctor will perform the valgus stress test. During this test, the doctor holds the arm still and applies pressure against the side of the elbow. If the elbow is loose or if this test causes pain, it is considered a positive test. Other specialized physical examination maneuvers may be necessary, as well.

The results of these tests help the doctor decide if additional testing or imaging of the elbow is necessary.

Computed tomography (CT) scans. These scans are not typically used to help diagnose problems in throwers’ elbows. CT scans provide a three-dimensional image of bony structures, and can be very helpful in defining bone spurs or other bony disorders that may limit motion or cause pain.

Magnetic resonance imaging (MRI) scans. This test provides an excellent view of the soft tissues of the elbow, and can help Dr. Craythorne distinguish between ligament and tendon disorders that often cause the same symptoms and physical examination findings. MRI scans can also help determine the severity of an injury, such as whether a ligament is mildly damaged or completely torn. MRI is also useful in identifying a stress fracture that is not visible in an x-ray image.

If nonsurgical treatment is effective, the athlete can often return to throwing in 6 to 9 weeks.

If surgery is required, recovery will be very different depending upon the procedure performed. If UCL reconstruction is performed, it may take 6 to 9 months or more to return to competitive throwing.

Recent research has focused on indentifying risk factors for elbow injury and strategies for injury prevention.

Proper conditioning, technique, and recovery time can help to prevent throwing injuries in the elbow.

In the case of younger athletes, pitching guidelines regarding number of pitches per game and week, as well as type of pitches thrown, have been developed to protect children from injury.

In most cases, treatment for throwing injuries in the elbow begins with a short period of rest.

Additional treatment options may include:

Physical therapy. Specific exercises can restore flexibility and strength. A rehabilitation program directed by Dr. Craythorne or physical therapist will include a gradual return to throwing.

Change of position. Throwing mechanics can be evaluated in order to correct body positioning that puts excessive stress on the elbow.

Although a change of position or even a change in sport can eliminate repetitive stresses on the elbow and provide lasting relief, this is often undesirable, especially in high level athletes.

Anti-inflammatory medications. Drugs like ibuprofen and naproxen reduce pain and swelling, and can be provided in prescription-strength form.

If symptoms persist, a prolonged period of rest may be necessary.

If painful symptoms are not relieved by nonsurgical methods, and the athlete desires to continue throwing, surgical treatment may be considered.

Arthroscopy. Bone spurs on the olecranon and any loose fragments of bone or cartilage within the elbow joint can be removed arthroscopically.

During arthroscopy, the surgeon inserts a small camera, called an arthroscope, into the elbow joint. The camera displays pictures on a television screen, and the surgeon uses these images to guide miniature surgical instruments.

Because the arthroscope and surgical instruments are thin, the surgeon can use very small incisions (cuts), rather than the larger incision needed for standard, open surgery.

UCL reconstruction. Athletes who have an unstable or torn UCL, and who do not respond to nonsurgical treatment, are candidates for surgical ligament reconstruction.

Most ligament tears cannot be sutured (stitched) back together. To surgically repair the UCL and restore elbow strength and stability, the ligament must be reconstructed. During the procedure, the torn ligament is repaired with a tissue graft. This graft acts as a scaffolding for a new ligament to grow on. In most cases of UCL injury, the ligament can be reconstructed using one of the patient’s own tendons.

This surgical procedure is referred to as “Tommy John surgery” by the general public, named after the former major league pitcher who had the first successful surgery in 1974. Today, UCL reconstruction has become a common procedure, helping professional and college athletes continue to compete in a range of sports.

The ulnar collateral ligament (UCL) is the most commonly injured ligament in throwers. Injuries of the UCL can range from minor damage and inflammation to a complete tear of the ligament. Athletes will have pain on the inside of the elbow, and frequently notice decreased throwing velocity.

During the throwing motion, the olecranon and humerus bones are twisted and forced against each other. Over time, this can lead to valgus extension overload (VEO), a condition in which the protective cartilage on the olecranon is worn away and abnormal overgrowth of bone — called bone spurs or osteophytes — develop. Athletes with VEO experience swelling and pain at the site of maximum contact between the bones. 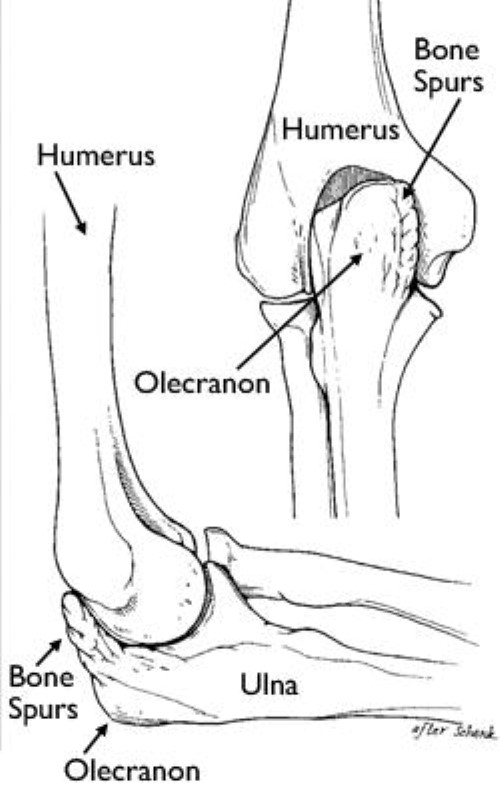 The abnormal bone growth of VEO is apparent in these illustrations of the back of the elbow and inner side of the elbow.

Stress fractures occur when muscles become fatigued and are unable to absorb added shock. Eventually, the fatigued muscle transfers the overload of stress to the bone, causing a tiny crack called a stress fracture.

The olecranon is the most common location for stress fractures in throwers. Athletes will notice aching pain over the surface of the olecranon on the underside of the elbow. This pain is worst during throwing or other strenuous activity, and occasionally occurs during rest.

When the elbow is bent, the ulnar nerve stretches around the bony bump at the end of the humerus. In throwing athletes, the ulnar nerve is stretched repeatedly, and can even slip out of place, causing painful snapping. This stretching or snapping leads to irritation of the nerve, a condition called ulnar neuritis.

Throwers with ulnar neuritis will notice pain that resembles electric shocks starting at the inner elbow (often called the “funny bone”) and running along the nerve as it passes into the forearm. Numbness, tingling, or pain in the small and ring fingers may occur during or immediately after throwing, and may also persist during periods of rest.

Ulnar neuritis can also occur in non-throwers, who frequently notice these same symptoms when first waking up in the morning, or when holding the elbow in a bent position for prolonged periods.

Elbow injuries in throwers are usually the result of overuse and repetitive high stresses. In many cases, pain will resolve when the athlete stops throwing. It is uncommon for many of these injuries to occur in non-throwers.

Most of these conditions initially cause pain during or after throwing. They will often limit the ability to throw or decrease throwing velocity. In the case of ulnar neuritis, the athlete will frequently experience numbness and tingling of the elbow, forearm, or hand as described above.